Resources for
Consciousness in Transition

This  book is based on the 1948 San Francisco Lectures, which were originally  published as “Metaphysical Notes.” None of these lectures were recorded.

1. Spiritual Healing
2. Teacher and Student
3. States and Stages of Consciousness
4. Thought Is Not Power
5. Nature of Error
6. Meditation
7. Teaching the Message
8. Ordination
9. Making the Adjustment
10. Questions and Answers
11. Argument or Treatment
12. Prayer and Receptivity
13. Messiah
14. A Word to the Wise
15. Seek the Answer Within
16. Illumined Consciousness
17. Opening Consciousness to Truth
18. Mysticism 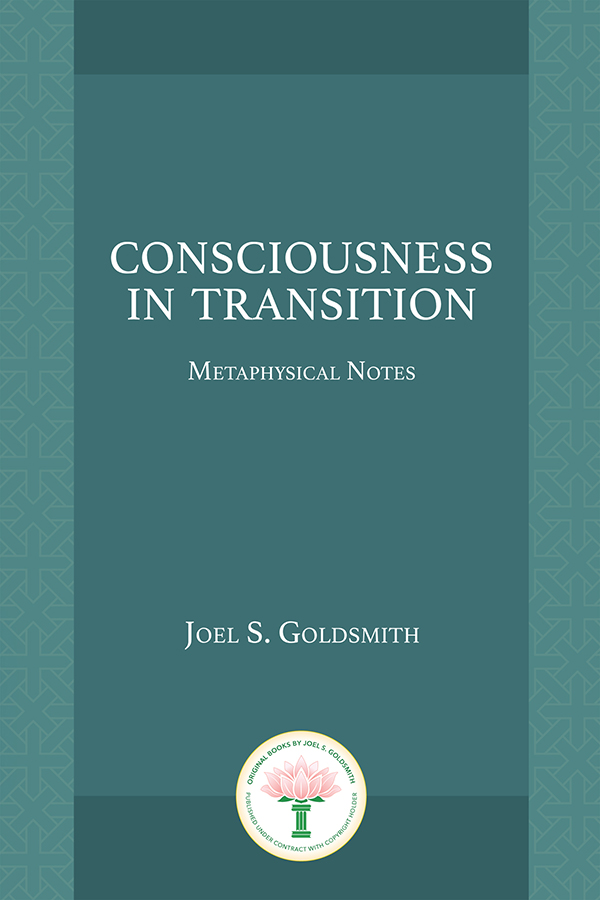 PAPERBACK
$ 18.95 USD
This product is out of stock.
Product is not available in this quantity.

Soon after the publication of The Infinite Way in 1947, Joel Goldsmith gave a series of lectures in San Francisco. These classes set the foundation for what was to become Goldsmith's worldwide teaching ministry. They laid out a framework of spiritual principles with such integrity and purity that students of sufficient intent and motivation who worked with them could experience illumination. These lectures were recorded on a wire recorder and transcribed for students. Later they were put into a book called Metaphysical Notes, which has now become Consciousness in Transition.

The book effectively allows the reader to sit in on Joel's early class work, which covered the practice of meditation, healing and treatment, prayer, the nature of God, and the nature of error. It introduces the reader to the path of spiritual growth necessary for ultimately attaining conscious union with God. In Consciousness in Transition, Goldsmith gives the reader specific instruction on living, moving, and having one's being in spiritual consciousness and teaches universal principles that have been passed down through the ages by saints and sages of all spiritual traditions.