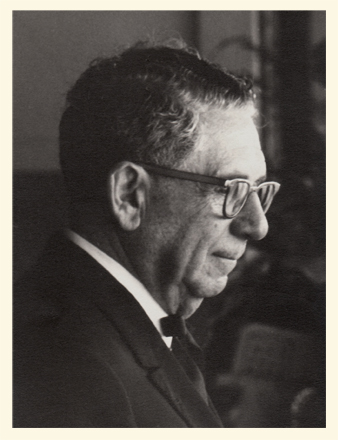 Joel Goldsmith (1892 – 1964), an internationally recognized spiritual teacher, author, and healer, taught a mystical message based on spiritual principles revealed to him. He called this message “The Infinite Way.”

As a young man apprenticed to his father in the import business, Joel Goldsmith traveled the world. He repeatedly saw instances of man’s inhumanity to man and saw the poverty and injustice that plagued the world. He wondered where God was in this human scene, and from then on, he was on a continuous search for truth.

One day later in his life, Joel became ill and sought help from a Christian Science practitioner. He was healed of the physical problem and also had a complete change of consciousness. His lifestyle was permanently changed, and he found that he had the healing gift. Within days, many people were calling him for help. This was to be the beginning a long and fruitful healing practice and spiritual ministry. For years, Joel immersed himself in a deep study of the scriptures of the world, looking for the principles underlying healing.

He joined the Christian Science Church, and for years he worked as a healing practitioner and spiritual advisor. In 1945, he left the Christian Science organization because he was receiving revelations of truth from within that could not be expressed inside the structure of an organized religion. Once he became independent in 1946, Goldsmith wrote his first book, The Infinite Way. He thought that he would then retire to a life of contemplation.

But the message in The Infinite Way prompted people to seek Goldsmith out as a spiritual teacher. Reluctantly, he held private classes on the mystical interpretation of the Bible. Later, some of these classes were published as the book Spiritual Interpretation of Scripture. Soon his writings brought invitations for lecture tours and classes. He traveled widely in the United States, Canada, England, Europe, Australia, New Zealand and South Africa, teaching the message of The Infinite Way. The revelations that Joel received are recognized by many as the original message that Jesus revealed to the world, now coming through another messenger in the language of the twentieth century.

Joel had a unique teaching style. He did not prepare “lessons.” Instead, his class preparation was deep meditation during the days preceding a class. When he took the platform, he opened his consciousness to Spirit. He said that the spiritual impartations that came through in classes were often new to him, and that he was hearing them for the first time along with the students. Throughout his life as a spiritual teacher, Joel said he was always “under orders” from the Spirit within that guided him. Although Goldsmith gave many, many classes, he always taught that the real work of spiritual development is done by the individual in the inner silence.

As the student body grew, Joel became adamant that the Infinite Way should never be organized. He believed that historically, organization had “put the veil” on messages of spiritual truth and obscured the original teaching. He wanted no memberships, obligations, dogmatic codes, or structured leadership for the Infinite Way message. To this day, there is no organization, membership, obligation, or formal leadership associated with the teaching. Spiritual seekers who have been drawn to the message of the Infinite Way somehow find the message on their own. They may enjoy meeting with others on the same path in classes or in tape groups, but their core practice is individual study, meditation, and practice of the principles.

As Joel Goldsmith’s teaching ministry unfolded, he published many books, which were largely based on his ever-growing class work. All titles are still in active circulation as both print and e-books, and a number of his books have been translated into multiple language editions.

In the early 1950s, some forward-thinking students asked Joel to record his classes on a tape recorder, and during his teaching ministry, more than 1,300 hours of his class work were recorded. These recordings have been preserved through the loving efforts of many dedicated people over the years and are still available in current formats for listening and study. Although Joel Goldsmith transitioned in 1964, his teachings have continued to grow in popularity. His work has inspired many of today’s spiritual teachers, who consider Goldsmith a key influence in their spiritual development:

Eckhart Tolle: “A new generation of mature seekers, receptive to spiritual truth, is now discovering Joel Goldsmith’s teachings, which have lost none of their relevance, aliveness and power. I foresee that those teachings will reach and impact even more people in the 21st century than during his lifetime. Joel Goldsmith’s inspired and profoundly inspiring books represent a vital contribution to the spiritual awakening of humanity.”
Dr. Wayne Dyer: “I have an 8×10 picture of Joel Goldsmith on my writing table. I feel his presence with me every day – I consider Joel to be one of my most important teachers. His wisdom guides me in all of my work.”
Marianne Williamson: “Joel Goldsmith has opened a door in my soul. He has helped me immeasurably in my search for peace.”

Joel Goldsmith left a mystical message to benefit the world and a treasure to be cherished by all students of truth.